Earlier today, President Trump told the major delivery companies delivering packages from China to the USA to 'search & refuse' their packages for fentanyl.

45 called out FedEx, USPS, UPS, & Amazon to "seek an alternative to China". According to a 2017 report by the US-China Economic & Security Review Commission, China is the single largest supplier of fentanyl to the United States. 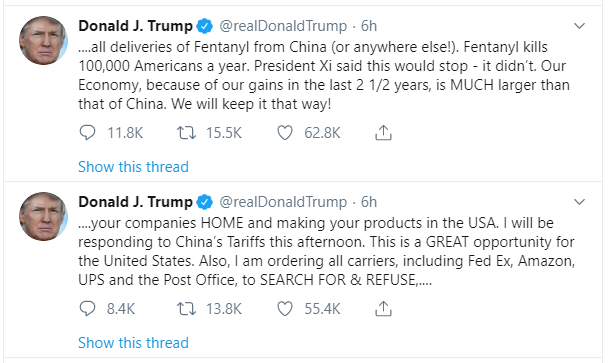 As displayed above, the President stated, “I am ordering all carriers, including Fed Ex, Amazon, UPS and the Post Office, to SEARCH FOR & REFUSE, .... all deliveries of Fentanyl from China (or anywhere else!)."

It has not been confirmed yet whether these tweets will be followed up with official guidelines from the government.

A recent official statement from UPS addressing this is as follows: “(UPS) follows all applicable laws and administrative orders of the governments in the countries where we do business. We work closely with regulatory authorities to monitor for prohibited substances.”

FedEx was also quoted as saying, “already has extensive security measures in place to prevent the use of our networks for illegal purposes. We follow the laws and regulations everywhere we do business and have a long history of close cooperation with authorities.”

Due to the extremely addictive and destructive qualities of fentanyl, the DoHS has been seriously considering labeling the drug as a weapon of mass destruction. In 2017, the CDC estimates that there were an excess of 48,000 opiod American deaths.

What do you think of these bold statements? I think it's about time we have a President that cares for the well-being of his citizens.

Let me know your thoughts in the comments!

P.S. Express your patriotism with our Great 45 All-Season Boots!