Iran Threatens the US, Trump Boldly Responds by Dan J Directly after President Trump's drone strike escorted terrorist leader Soleimani to his 72 virgins in the afterlife (by the way, is it ever specified if they're male or female virgins...?), the Iranian government was stupid enough to hurl outrageous and unfounded threats to the United States and President Trump personally.

Unlike the blue-bellied coward that held office before him, President "Huge Balls" Trump did not roll over and take it; he took immediate and massive action.

Let's take a look at what threats these half-witted goat lovers threw our way, and how President "Shut Up & Stay Down" Trump handled it.

There's been three "major threats" that Iran has "promised" so far.

The first was when Iranian Supreme Leader Ayatollah Ali Khamenei promised to "take revenge for this heinous crime (AKA killing a known terrorist leader)... harsh retaliation is waiting for the criminals whose filthy hands spilled his blood."

The second was when Iranian MP Abolfazl Abutorabi threatened on national Iranian television to directly attack the White House.

He was quoted in the interview as saying:

"We can attack the White House itself, we can respond to them on the American soil. We have the power, and God willing we will respond in an appropriate time."

The fact that these people state the location of their "attack" on national television shows that they don't know the first thing about tactical strikes. I mean come on, if you're going to try and be scary and tough, try to not be a complete asshat about it.

I need to pause for a moment and bring attention to something that bothers me about these guys; where & how do their parents come up with these names, and who on Earth can pronounce them?

As of writing this article, the third and final threat that was made was against President Trump himself.

At Soleimani's funeral procession, Iran's regime put out a bounty for President Trump's head for $80 million.

Now this is the kind of thing that removes any shred of validity that any of their threats might have had before, and it was already close to nothing to begin with.

Enough about these morons and their shithole country, let's move on to President Trump's response.

How the President Responded

Good ol' 45 didn't take long to respond to these fools, and he held nothing back as shown in this string of tweets: 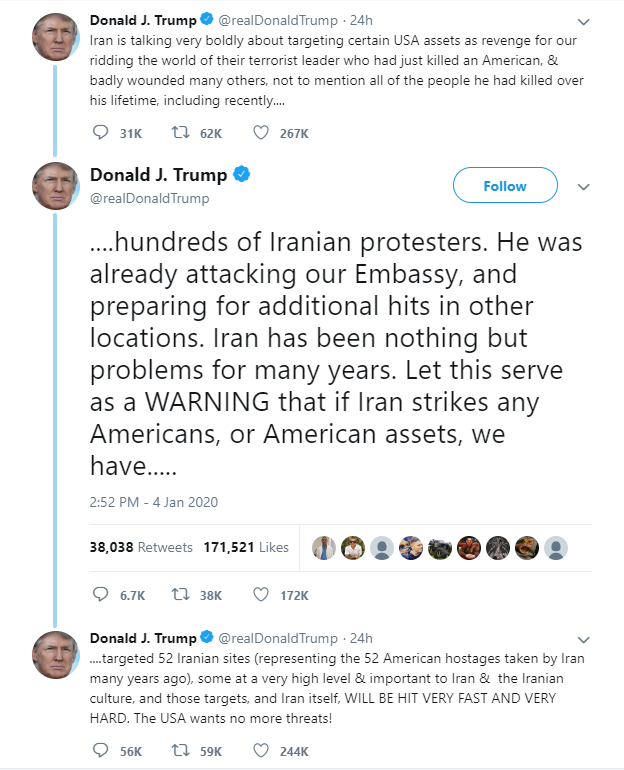 Although his response was brutal and massive, he ended it stating, "The USA wants no more threats!". Nobody wants war, including the President, but he's making it very clear that he will do as he must to protect the American people.

Shortly after that, the President swung his gargantuan balls around again, tweeting:

"The United States just spent Two Trillion Dollars on Military Equipment. We are the biggest and by far the BEST in the World! If Iran attacks an American Base, or any American, we will be sending some of that brand new beautiful equipment their way...and without hesitation!"

This is like a breath of fresh air, straight from a dewy morning in the Tennessee valley.

Finally, a President that lets our enemies know that we are not to be pushed around by anybody.

We'll continue to keep you updated on the Iran conflict with accurate news reporting from the Liberty Tee Shop Trump 2020 Re-Election Team every Monday & Friday, doing our duty to get President Trump re-elected.

P.S. Stay warm during winter Trump Rallies with our brand-new "Trump Promises Kept 2020 All Over Print Hoodie", now 17% Off!