Explained: Trump Strikes Back Against Iran by Dan J Explained: Trump Strikes Back Against Iran

Remember earlier this week when President Trump said something along the lines of, "...should Iran strike any U.S. person or target, the United States will quickly & fully strike back, & perhaps in a disproportionate manner."? 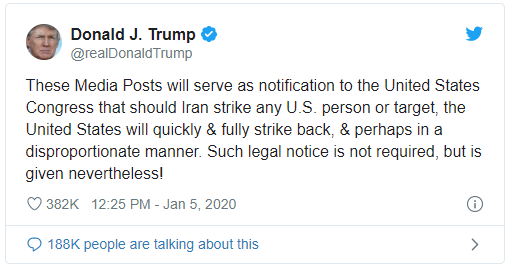 Yeah, well Iran tried to strike back, but were too busy staring at the hot goats walking by to notice that their missiles were mostly defective.

And as promised, President Trump is disproportionally striking back.

But not with missiles, bombs or guns this time; The President doesn't want to start a war. This time, President "Super Sack" Trump struck back in a much more strategic way; sanctions.

Also known as embargo, economic sanctions are commercial and financial penalties ordered from the United States against a self-governing state, group, or individual.

Don't let the word economic make you think that this is just an economy thing; it is a tactical use of force for political, military, and social problems.

Imposing limits on a nation's economy can have devastating effects by cutting off trade routes or ending trade agreements, often crippling a nation's military funding.

What Sanctions Are on Iran?

For the purpose of staying current, let's focus on President Trump's newest additional sanctions against Iran.

"(The United States is issuing an E.O. authorizing sanctions against) any individual owning, operating, trading with or assisting sectors of the Iranian economy, including construction, manufacturing, textiles and mining."

Why Did Trump Impose More Sanctions?

These new sanctions limit Iran's ability to do business with America, access the USD, travel to the States, and collaborate with United States banks.

Limiting the Iranian Regime's economy in this way has two major repercussions:

Iran now has no choice but to either continue retaliating against the U.S. and quickly cannibalize itself, or stop its kicking and screaming and ask "How high?" the next time President Trump says, "Jump, bitch."

What do you think about President Trump's tactical economic strike?

Should he have just blown them all to hell like he did with Soleimani?

P.S. Tell those libtard cucks how you really feel with our "Trump Someone With Balls 2020 Hooded Sweater"!